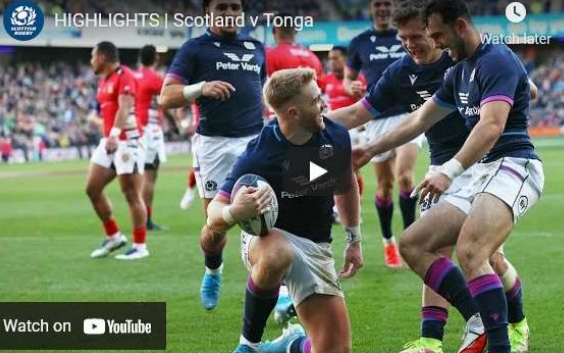 BBC SCOTLAND REPORT: “Kyle Steyn became the first Scotland player to score four tries in a match for 26 years as Gregor Townsend’s side opened their autumn series with a 10-try defeat of Tonga.

Rufus McLean, twice, and Pierre Schoeman scored on their debuts and George Turner, Nick Haining and Oli Kebble also crossed for the hosts.

David Lolohea’s score for Tonga came while the hosts were down to 14 men with Rob Harley’s sin-binning and the tourists’ Aisea Halo was also yellow carded.

Luke Crosbie, Ross Thompson, Marshall Sykes and Jamie Dobie came off the bench to follow McLean, Schoeman, Sione Tuipulotu and Jamie Hodgson in debuting for the Scots, who were playing in front of a Murrayfield crowd for the first time in 19 months.”

MATCH HIGHLIGHTS (via You Tube)