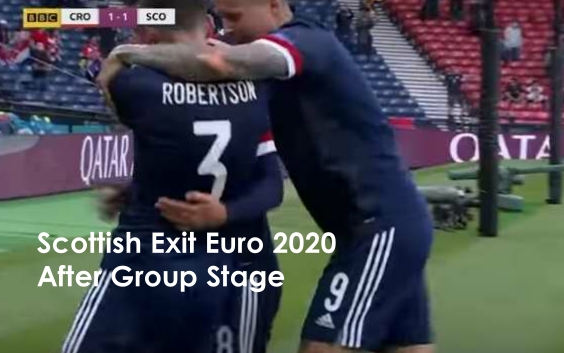 After a disappointing first result where Scotland were defeated 2-0 by The Czech Republic, honour and good feeling was restored by a creditable 0-0 draw with England at Wembley. That result set Scotland and Croatia up for a winner take all head-to-head where the victor would progress to the knockout stages of the tournament.

Hopes were high that Sotland could advance to the knock-out stage for the first time in a major tournament but the footballing gods (and Croatia, more aptly) seen to it that the final match was to be defeat for Scotland.

See Highlighs from Scotlands 3 Euro 2020 games below.
*Videos are via You Tube embeds and not hosted on this website

Highlights: Modric stars for Croatia as Scotland go out

Scotland 1-3 Croatia: Scotland’s dream of making history by progressing at Euro 2020 came to a sobering end with a heartbreaking defeat by Croatia at Hampden.

England 0-0 Scotland: England and Scotland played out a goalless draw at Wembley to leave both countries with their hopes of reaching Euro 2020’s knockout stage very much alive.